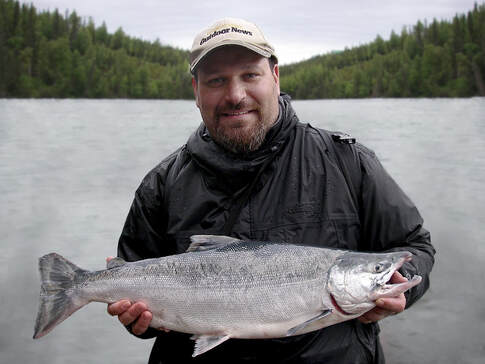 Christian holds up a fresh Sockeye (Red) Salmon on the Kenai River in Alaska.
SALMON SURVIVOR
A Middle Grade Adventure
by Christian A. Shane

Twelve-Year-Old Jack Cooper attempts to catch the Alaskan “Salmon Slam”
​
After the death of his father and fishing partner, twelve-year old Jack Cooper unwillingly travels with his mom from Pennsylvania to Alaska to meet his grandfather, Fly Bob, for the first time. Over the summer, Jack challenges himself to do something his father ‘Redds’ Cooper had never accomplished. He attempts to catch the Alaskan Salmon Slam, all five species of Pacific salmon in one summer.

While chasing after the Red, the Chum, the Pink, the Silver and the elusive King, he’ll need the assistance of his so-called grandfather and veteran fishing guide, Fly Bob, to teach him the secrets of fishing for salmon in Alaska.